In 1957 The Diamonds released an instant million selling hit called “Little Darlin’.” The song continues to sell worldwide and has been dubbed “the National Anthem of Rock and Roll”. To date it has sold approximately 20 million copies.

Through the years since the release of “Little Darlin’” The Diamonds have learned one important lesson—the durability of this classic rock and roll music is as much about the future as it is about the past. As a result, The Diamonds continue to expand their audience to this day, performing in a variety of venues and settings worldwide. These performances include—with Symphony Orchestras, in Performing Arts Theatres and major concert halls, on cruise ships, in casinos, at county and state fairs, on tours of England, Ireland, Brazil, Chile, Korea, and Japan, for benefit concerts, corporate conventions and at nightclubs. “We’ve been pleased to find a growing audience among all age groups. They love songs they can understand, remember and actually sing the words to—today, tomorrow, or even 20 years from now.”

“The Diamonds were wonderful. Their performance brought the crowd to their feet; no one wanted to leave when their performance was over. I keep receiving compliments even though the Palos Hills Friendship Festival was over 2 weeks ago!” – Mary Jo Vincent, Director, Community Resource and Recreation Department

“A large part of our audience said it was our best concert ever. I would recommend The Diamonds to anyone that enjoys good music, a fun filled, energetic evening, and great entertainment.” – Carol Matney, Director, Summerton, S.C. Tulip Festival 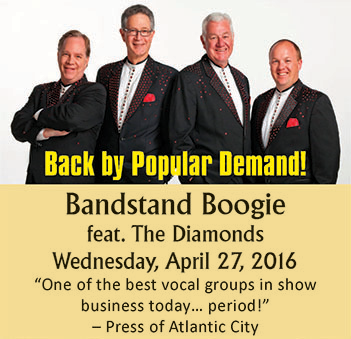